Pistachios are one of natures superfoods. High in fibre, low in fat, loaded with vitamins and natural anti-oxidents

Pistachios are edible seeds of the pistachio tree (Pistacia vera).The  pistachio tree is a member of the cashew family, and is native to Central Asia and the Middle East.

Archaeology shows that pistachio seeds were a common food as early as 6750 BC. Flourishing in hot climates, pistachios spread from the Middle East to the Mediterranean, quickly becoming a treasured delicacy among royalty, travelers and common folk alike.

Legend has it that the Queen of Sheba decreed pistachios an exclusively royal food, going so far as to forbid commoners from growing the nut for personal use. The Hanging Gardens of Babylon were said to have contained pistachio trees during the reign of King Merodach-Baladan about 700 B.C.

In the first century A.D., Emperor Vitellius debuted this prized nut in his capital city of Rome.  Along with almonds, pistachios were frequently carried by travelers across the ancient Silk Road that connected China with the West.

The nut that smiles, in China pistachios are known as the "happy nut" because they look like they're smiling. Often given as a gift during the Chinese New Year, pistachios are a symbol of health, happiness and good fortune. 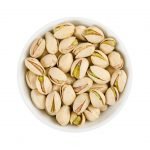 Our original product with a hint of saltiness to bring out the flavor and then roasted to perfection. Great as a snack or for the entertainers to add to a platter 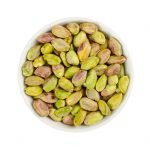 The idea ingredient for the home cook or restaurants. Super tasty and we have done all the work for you. Equally at home in deserts, salads and as a stuffing our pistachio kernels are ready to add to any dish. 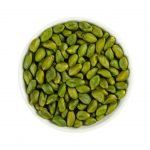 These pistachios are not salted or roasted. As close as you can get to eating pistachios straight off our trees

Perfect as a gift or to treat yourself